Tripawd Wyatt gets to know the Canadian Cancer Hero Terry Fox, and how much he did to raise awareness of cancers like osteosarcoma so that a cure can be found and no more Tripawds lose their leg to the disease. 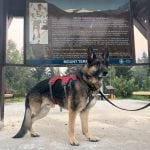 I am a Tripawd but I did not lose my leg to cancer the way lots of yous did. I know, too many, right friends? Amputation is ruff enough but cancer? Well, it bites. I know, because my predecessor Jerry G. Dawg had it. Osteosarcoma, to be exact. He’s been gone almost 10 years now, but my parents still get tears in their eyes just thinking about that damn disease. So when we were flying south from Alaska and leaving Canada, they made sure to stop at a very important place along the way, kinda like to honor Jerry. We stopped at The Mount Terry Fox Provincial Park.

You know how lots of people see a Tripawd and they go “Hey that dog only has one leg!” Of course we  have three, but all they see is that one missing leg. We’re lucky that way. We have spare legs. People who lose a leg to a cancer like osteosarcoma are not as lucky. They must make do with one leg, and face life head on in a way most of us can’t even imagine. The Canadian hero Terry Fox was one of them.

You kids may not remember who he was, but you need to know and I’m just the dawg to tell you. Heck, my mom and dad were just little punks when the world met this one-legged hero. But they do remember hearing the story of this Canuk’s courage and bravery. In 1980, Terry was only 18 years old when doctors told him he had osteosarcoma. They took his leg. But they didn’t take his life.

The kid didn’t let cancer get him down! Just like us Tripawd dawgs! He knew he had to do something so more people like him didn’t suffer from the disease. But what could one person, with just one leg do? Well, he showed the world exactly what!

On April 12, 1980, Terry started an epic run across Canada to raise money for cancer research. On. ONE. Leg! Dude, not even a Tripawd could do that!

Nobody knew who this hero-in-the-making was (hey this was before Facebook, remember!). But by the time he ran 143 days and 3,339 miles across the country on his “Marathon of Hope,” the world knew they were looking at greatness. Later, Hollywood even made this movie about him.

Sadly, Terry didn’t get to finish the run. Cancer. Lung mets. I don’t have to tell you the rest of that sad story.

But it wasn’t the end of Terry’s legacy when he died at age 22. Nope. The Terry Fox Foundation got started. Look what he did! One man! He raised money to get the ball rolling and today that non-profit is one of the best, most successful cancer research foundations. Whether for pets or people, the foundation is doing all they can to help scientists all over the world find a cure to stop cancers like osteosarcoma.

As Sheriff Wyatt Ray, I’m ordering ya to learn more about the Terry Fox Foundation and support their efforts, got it? Because I want a cure. WE want a cure! And WE don’t want one more Tripawds member to suffer because of that disease, right? Not. One. More!

And now back to my regularly unscheduled misadventures . . . 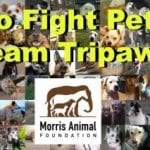 Check this out. Did you know that half of my dawg friends are gonna die of cancer some day? No. Joke. I ain’t kidding. When I was at the AAHA show with my people, Dr. Hardy from Colorado State told me all about it. I was so sad I just wanted to bury my head in the One Cure stuffie she gave me. 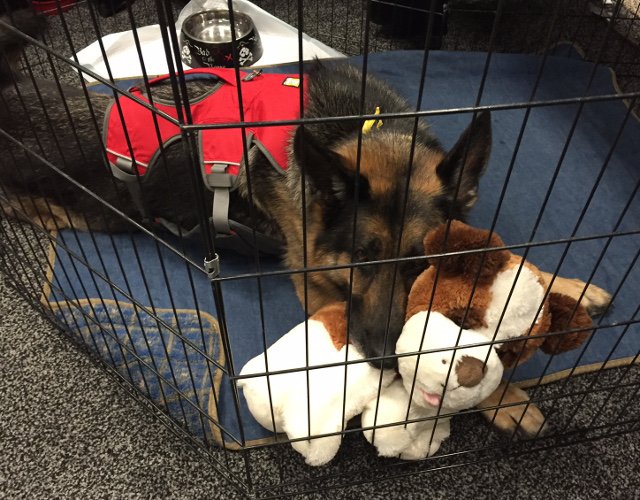 But no. I refuse. I will NOT give in to fear or evil cancer. I will STAND UP and fight it with every furry hair on my body. And that’s a LOT of fur, people. 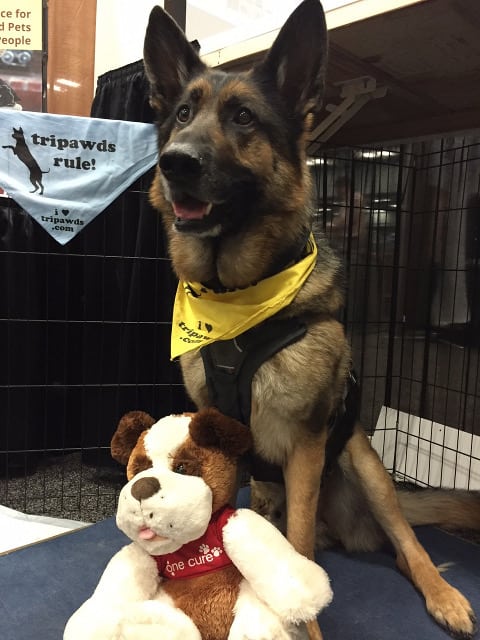 Join Me, Join Team Tripawds for the April 24 Morris Walk!

Have you had it with cancer too? OK then. Next Saturday, April 24, Team Tripawds is gonna be at the Morris Animal Foundation Canine Cancer Walk in Los Gatos, California.

But even if you can’t be there, you can still join us! A donation of any amount will put you on our team and we can all help Morris Animal Foundation keep doing their great work.

Cancer, look out. Team Tripawds is mad and we’re not gonna take it any more! 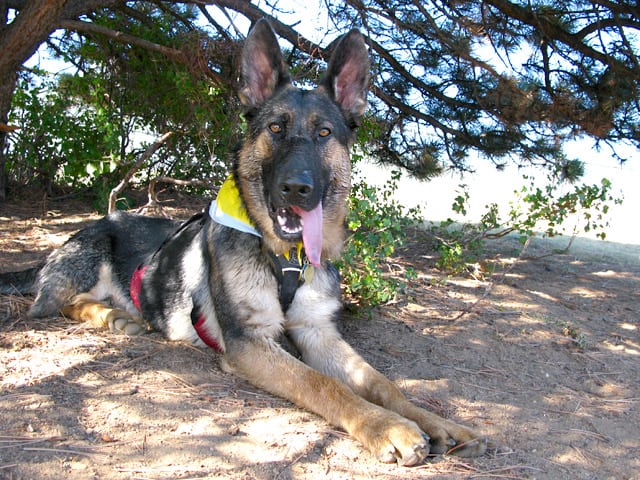 On September 19th, my pawrents and I went to the Morris Animal Foundation K9K Walk to Cure Canine Cancer.

I was proud to be there representing the Colorado branch of Team Tripawds. I could feel my Spirit Brother Jerry there with us, hopping right along with all the cool dog pawrents and dogs, all raising money and doing their best to find a cure to that nasty disease. 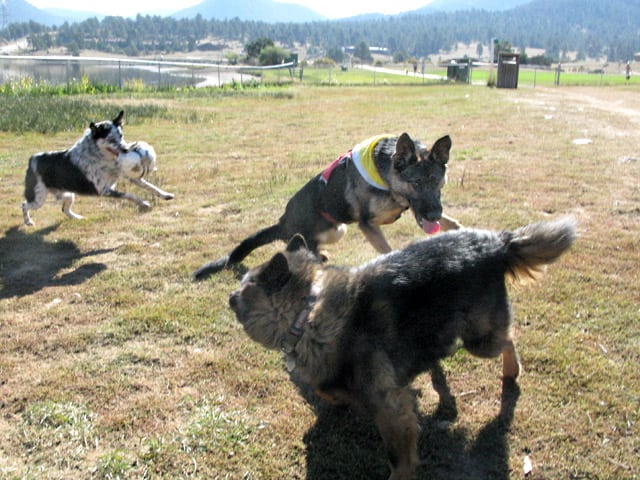 The walk wasn’t all sadness though. There was an awesome dog park right next to the route, which no dog in his right mind could resist.

Even with all that walking I did, I wasn’t too tired to play with these rowdy pups!

Thanks everyone, for helping out Team Tripawds and the Morris Animal Foundation raise $15,562 to help with canine cancer research.

Once again, I showed Mom and Dad that I can play nice with other dogs, even four legged ones.