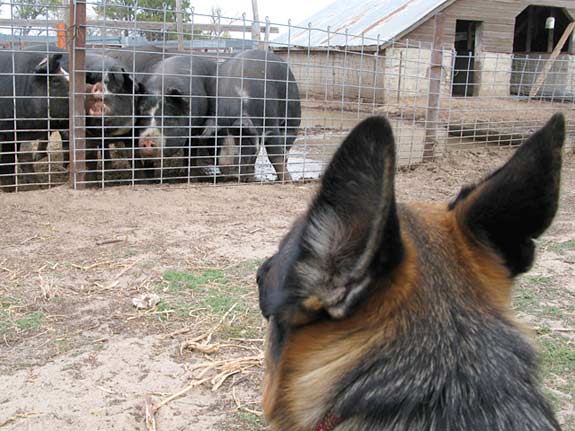 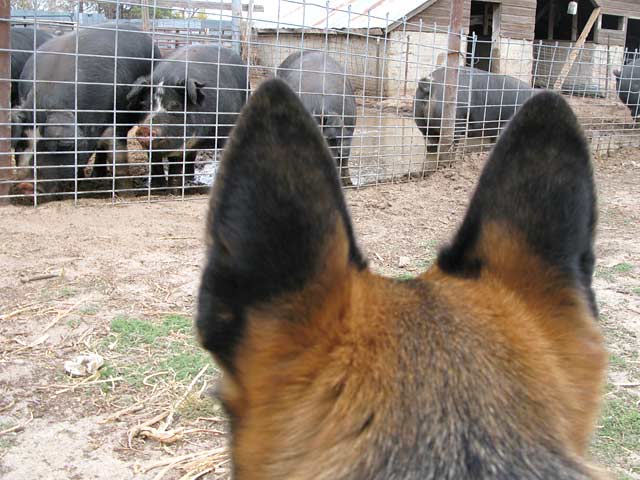 After we visited Karma’s home town we went to see my friend Kevin the Heritage Hog Farmer. The trip got even better when I saw what was on the menu. 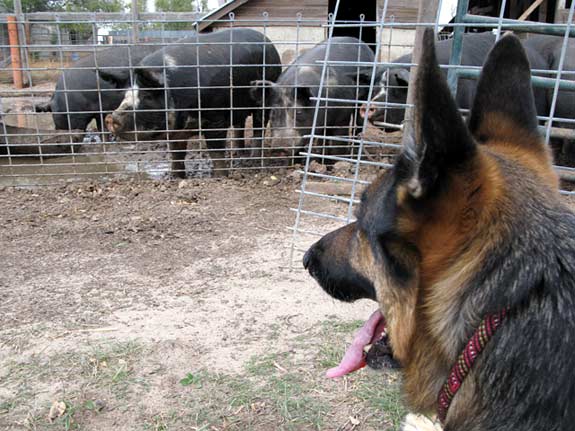 I was SO excited! But then they gave me the bad news. “No Wyatt, those are not for your dinner, they’re for other people’s dinners.” 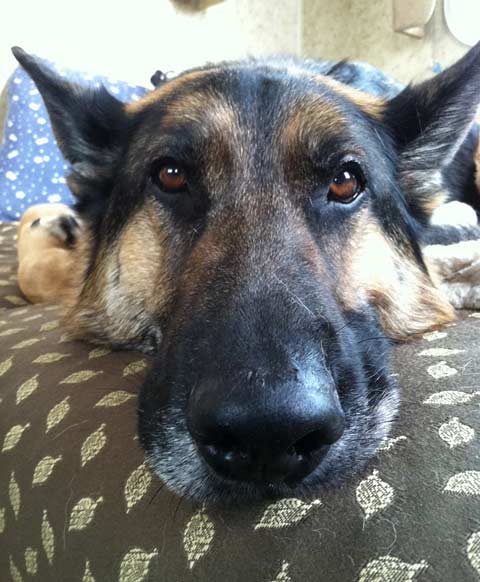 I keep forgetting to tell you guys about our drive through Colorado in November.

There we were, driving away from the snow for the rest of the year (which is my favorite thing in the whole world, can someone please tell me why my parents don’t like to live there when it’s snowing?), when Dad takes the doghouse on wheels and makes this sharp turn down a little bumpy road.

We went to an old mining town that’s so old it’s not even on the map. They heard about this place, “Willard,” from my friend Karma. She is a really nice Tripawd mom, you should meet her! She’s in the Tripawds chat most evenings.

Karma told us that her Momma Cynthia, who got her angel wings when Karma was very young, is in the cemetery here in this little town. Since Karma is on the other side of the country and can’t go visit, we wanted stop and pay our respects for her.

She told us where her Mom is located, under a pretty tree all by itself. Karma says having a tree is a very big deal because there aren’t too many trees out in the prairie. She’s right. But it’s nice and pretty anyways.

We paid our respects and left this charm for Mrs. B. Can you see it in the flowers?

They say leaves don’t fall far from the tree and that it’s like that with pawrents too. I agree. If Cynthia was anything like Karma, she was one super duper nice lady.

Thank you Mrs. B. Karma is pretty kewl.

Four three-legged German Shepherds and one mix named Smokey B gather for a pawty in Colorado mountains.

Some people said hell would freeze over before an epic event like this would happen again. Well hah! It DID! And hell still froze over!

The Oaktown Pack came to see me in Colorado and it went something like this:

Then we had some more fun in the snow. Hell was freezing over but no matter…

And the fun went on! Me and my people are still recovering so they gotta get the live action photos on the ‘puter. Stay tuned!

See how a three-legged German Shepherd dog spends his summer at a Colorado dude ranch.

Some people think that all working dogs do is work. Well, I’m here to say that’s not true. Even German Shepherds know how to relax sometimes.

I was in a pawrade. Everyone cheered me on because I’m so great.

A few times a week my humans take me swimming.

Go ahead, catch me!

And then there’s a few times when I don’t do anything at all but look cute and beg for treats.

It’s a tough life as a working ranch dawg. But somepawdy’s gotta do it.

My parents take me to crazy places. We went camping by a lake in Colorado. It was nice, but since there was nobody there but us, and a lot of birds, I was so bored. I even got to stay outside by myself all day, cause there was nopawdy around. 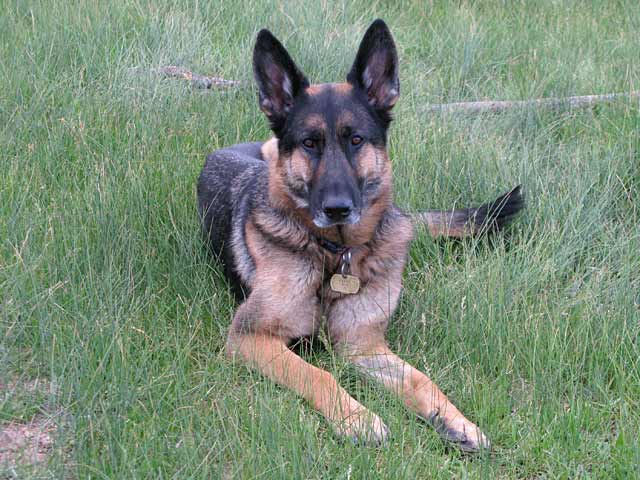 All day long I sat around. But I got to chase sticks when
my people would stop working for a few minutes. 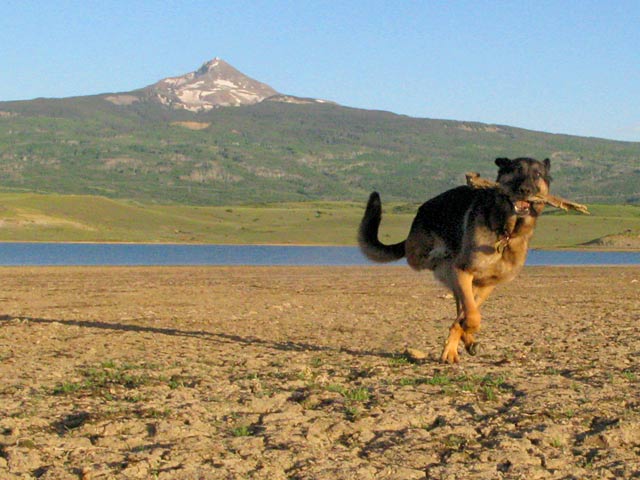 I kept an eye on the place too.
Hey wait, who is that? 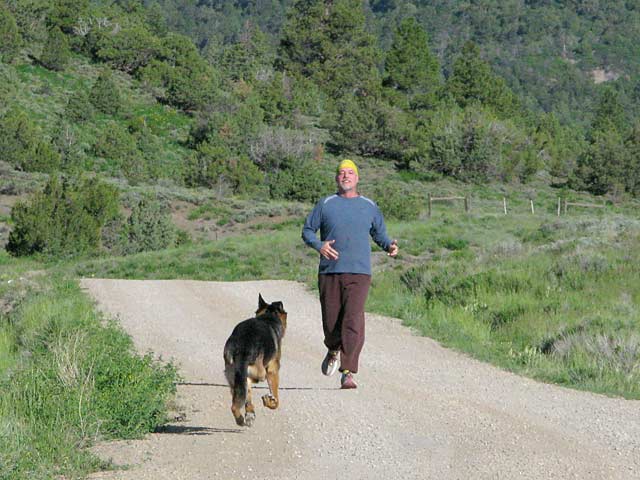 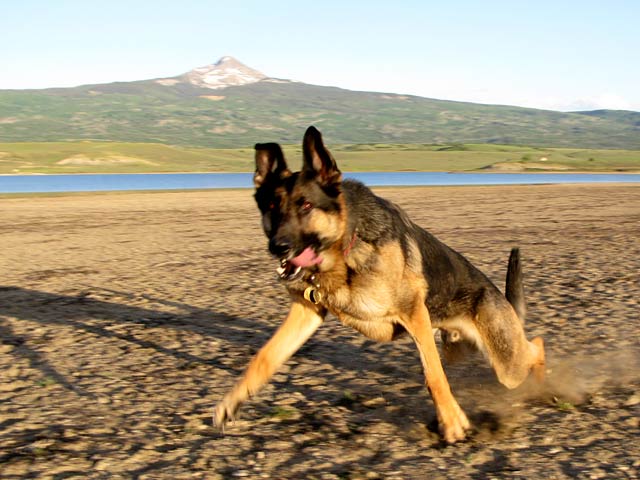 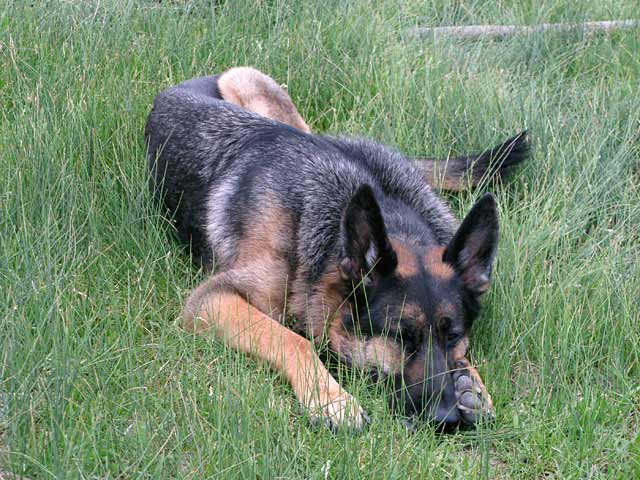 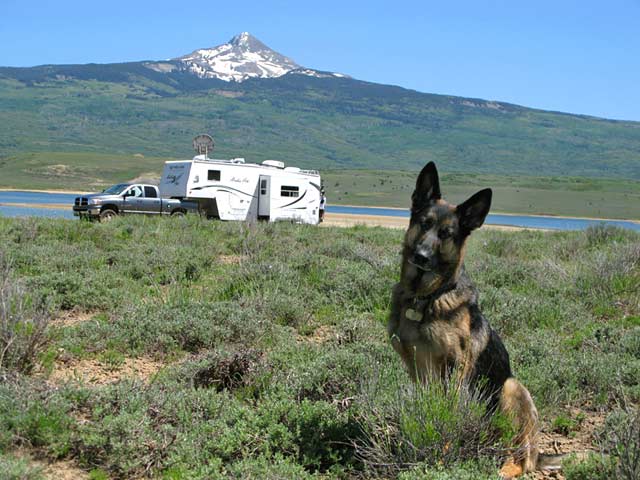 There’s nothing to do here!
Can we please go somewhere so I can get a job?